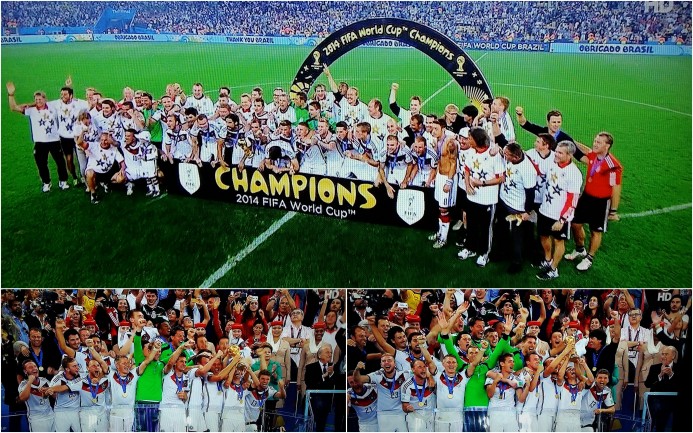 Es geht nicht weiter! Die Deutsche Mannschaft ist Weltmeister. Those were the words of the reporter on the German Channel ARD after the referee whistled for the ending of the FIFA World Cup 2014 final Germany vs. Argentina in Brasil. Meaning that it doesn’t get any better. The German team is World Champion. What we all knew happened and I for one am happy for the Germans. Germany became the first World Champion from Europe on South American ground. That’s why I agree to also say Hochachtung fur die Deutsche Mannschaft. Deep respect for the German team. That’s right, I’m a football fanatic too.

Giving that I am from South America I cheered for those teams and really hoped the world cup would go to one of the South American teams. My favorite was Argentina and yes, I am a Messi fan. Of course I was supporting the Orange Lions during all their games and had high hopes for them. Even though the world suddenly had something against Arjen Robben, he was my favorite of the Dutch team. So you can imagine that during Netherlands vs. Argentina it was a hard one, because with a loss of Argentina it would mean a final between two European teams, and my hope for a South American team to take the world cup wouldn’t matter anymore. It would’ve been a final that probably all of Holland hoped for: Germany vs. the Netherlands. But still during Netherlands vs. Argentina I cheered for my Dutch lions, but was so happy for Argentina. Yes! South America vs. Europe. It would’ve been a great way for Argentina to get revenge for the FIFA World Champion match back in 2010 where they lost 0-4 from Germany. But also this time Germany was the stronger team.

Crazy me stayed up all night and watched the ending of the game again (re-run) and the ceremony and celebration on German Channel ARD, followed by different reports of the Championship. Taking pictures of my tv screen. It was so much fun seeing the Germans so happy that I couldn’t help but being happy for them.

The coach and his happy players:

You can say whatever you want, but just like we say in sports “may the best team win”, the truth here is: the best team won. And what a way! With one of the most beautiful goals we’ve seen this entire World Championship, scored by 22-year-old and number 19 Mario Gütze, it is well deserved. Congratulations Germany! Herzlichen Glückwunsh Deutschland!

Paparazzi mania, photo shoot and a happy dance around the World Cup. See also how Klose still can’t believe they did it:

Now back to fashion!

Photos taken thanks to the broadcasting of ARD. Copyright of FIFA.